Samuel Mayes was born in 1877 at Magheragall near Lisburn, the third of four children of John and Isabella Mayes, and after studying at Trinity College was ordained in 1904 at the age of just 27. His first curacy began in Ballintemple Cavan, followed by a spell in Portadown before his arrival at Creggan Church of Ireland Crossmaglen in 1908. He soon settled with his wife Florence, daughter of a Presbyterian minister, and in the 1911 census was living at 6 Creggan Bane Glebe Crossmaglen with two young sons Thomas David Dougan aged 2 and the infant Hugh Hastings Richard; a catholic main servant named Mary McShane and a Church of Ireland maid servant called Mary Adelaide McAlister. 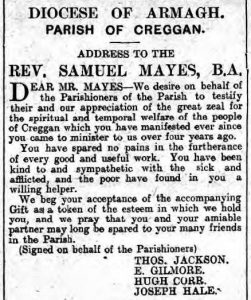 It would appear he was a popular figure, emphasised by a presentation received from the parish after just four years in the role. Not unsurprisingly for the period, and maybe more-so because of his place of birth, the Rev Mayes was very much a Unionist and by all evidence a very forthright one. In 1911 at a meeting forming the Newtownhamilton Branch of the South Armagh Unionist Association, he told those assembled that ‘he was first of all an Irishman, and loved every green sod in his native land, and because he loved Ireland he opposed Home Rule.”

He signed the Ulster Covenant in Clarkesbridge, and the following year he was recorded as being one of three organisers for the Ulster Volunteer Force in Crossmaglen alongside two other Creggan parishioners, John Johnston of Cloghoge and Robert Rowland of Urker.

All evidence would indicate he was an officer in the U.V.F. locally, part of the County Armagh 2nd Battalion, and perhaps because of this he was eventually to serve in the Battalion of the new army set aside for the County Armagh U.V.F. – the 9th Battalion Royal Irish Fusiliers of the 36th Ulster Division. In
March 1916 Mayes left Creggan Parish for St. Aidans Kilmore near Richhill, after which he soon volunteered with the Army Chaplains Department, and in December 1916 was made a

chaplain to the Forces. At the rank of Chaplain 4th Class, the equivalent of the regular rank of Captain, Mayes initially served with the 110th Field Ambulance before joining the 9th on 22nd March 1917.

His service saw him as Chaplain during the horrific Battle of Langemarck where over 10,000 British Soldiers were killed. It is not known how close Mayes came to action on the front, there were 179 chaplains killed during the Great War, but whether he was or not his role of providing support, comfort, care and compassion for the dead, injured and many others touched, alone would have been challenging. The role included writing to the families to the dead and injured such as in December 1917 when he wrote to the mother of Private David Bryans Callan Street Armagh. Mayes told the young mans mother that he had died like a hero in the charge against an enemy position.

Upon his return Mayes remained a committed Unionist and Orangeman, and filled the role of Curate of St Aidens Kilmore until his retirement in 1946.