Believed to be the home of the first Protestant Church on the island of Ireland, St Patrick’s built in 1578, Newry’s position as a thriving market and garrison town ensured it always boasted a committed Unionist population. This level of commitment was underlined by its contribution to the movement against the Third Home-rule Bill.

The South Down town, now City, of Newry, sits geographically in what some refer to as ‘the gap of the North’. Nestled on the main passageway between Belfast and Dublin, straddling the County boundary between Down and Armagh, its location has always ensured it had immense strategic and economic importance.

This economic importance in particular ensured that its minority Protestant population would be particularly vocal against the imposition of Home-rule. Home-rule was almost universally believed by Irelands Unionists to have inevitable dire economic outcomes. As such, as the Third Home-rule crisis developed, the greater Newry district of South Down was among the first to mobilise and organise with the aim of defeating the Bill. 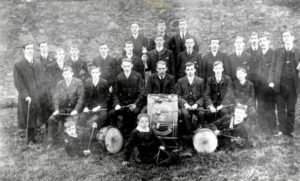 The earliest opportunity near at hand for Newry Unionists to display their determination on a large scale came in the run-up to the Ulster Covenant. On Thursday 26th of September 1912, just two days before the mass signing of the document, the South Down hamlet of Ballyroney near Rathfriland hosted a massive demonstration. Tens of thousands gathered on the day, including in their ranks the Orange Districts of Newry and Carlingford; and the Unionist Clubs of Newry, Rostrevor, Warrenpoint and Altnaveigh. What is more notable is that the following evening, on the eve of Covenant day, the Newry Unionist Club took part in a route march in its home Town. About 120 men were in attendance, headed by the Newry Royal Victoria Flute Band. Newry Unionists, like many in the rest of Ulster, were already well underway in ensuring they were prepared militarily to defend their position.

Just formed in 1911, Newry local Unionist Club was the focal point for the vast majority of local anti Home-rule activity, albeit working closely in conjunction with the Orange Order. At its 1st annual general meeting in November 1912, the presiding officer the Earl of Kilmorey made it very clear on his view of the Unionist Club movement, noting their ‘extraordinary rapid increase’ and  the ‘ample evidence’ of the strength they were giving to the ’cause’. Rostrevor Unionist Captain Frank Hall, secretary of the entire Unionist Clubs of Ireland, impressed on all in attendance that organisation was key in defeating Home-rule, suggesting that Newry be a centre for all the outlying districts and work closely with its fellow clubs in Altnaveigh, Bessbrook, Donaghmore and Warrenpoint. What Hall was proposing was the embryonic Battalion system of the Ulster Volunteer Force, and indeed he himself would later become the military secretary for the UVF and a member of its 12 man committee on ‘gunrunning’. Hall had been appointed as secretary to the Unionist Clubs for the purpose, as Carson put it, ‘to bring in the staunch Unionists who are not Orangemen’.

While Frank Hall was working on a Province wide basis, from an early stage one of the most prominent local figures was his brother, Captain Roger Hall of Narrow Water Castle near Warrenpoint. A Deputy Lieutenant for County Down, and a Justice of the Peace for both Down and Armagh, he was the sole local representative on the twelve man County Down Committee of the UVF formed on 23rd December 1912. Roger Hall had been a serving officer in the Royal Fusiliers until retirement in 1896, and his military experience and expertise would prove instrumental in the Volunteers.

In 1913 as the Ulster Volunteers were developing, there was some significant schism between the Newry Unionist Club and the local UVF. The Club had of course been instrumental in initiating drilling and organisation for local Unionists, and was resentful of having to hand over this work to the UVF. As late as October 1913 it still believed that the local UVF was simply a subordinate part of the Club, and that it and not UVF HQ should have the right to appoint officers. Eventually however the new ‘Force’ took predominance and by early 1914 had developed its own Battalion structure. Newry and district would make up the majority of the 2nd Battalion of the South Down Regiment Ulster Volunteer Force. 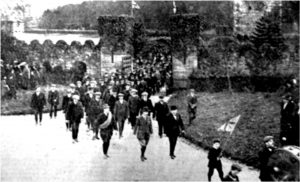 At its peak in July 1914, the 2nd Battalion South Down Regiment, boasted over 1600 men. Initially it took in the wider Newry area, taking in a small section of South Armagh; along Carlingford Lough including Warrenpoint and Rostrevor; and right up to the Mourne’s encompassing the Kilkeel region. Commanding Officer was Captain Roger Hall, with Second in Command William Moorehead J.P, Adjutant Robert Nesbitt and Chief Medical Office Dr George McConnell. Original documentation of the Battalions Company structure unfortunately has not survived, but from other related documents and newspaper reports it is possible to give a reliable outline.
A, B and C Companies were all located within and on the periphery of Newry Town itself. A Coy Commander was J.F. Agnew, with R.G. Mann and R.W. Fisher Half Coy Commanders. B Company Commander was J. Moore Boyle and C Company Commander was Fred Ferris. Altnaveigh Company in South Armagh was D Company under J.J. Maitland, with E Coy based in Crieve under the charge of F.H. Mullan. Sheepbridge was F Company, O.C. being Gilbert Moorehead; with G Company Mayobridge under local minister Rev Bredin. Warrenpoint H Company O.C. was B. Glenny, while K Coy was Rostrevor with acting Commander of June 1914 a Mr Richards and instructor Mr Robert Toombes. No J Company is ever recorded in media reports, but references are made to Volunteer units in Glenville and Finnard.

Initially I Company in the Battalion consisted of the Kilkeel contingent of Volunteers under the Earl of Kilmorey. The greater Kilkeel area had a very large number of men, approaching 500, and the reasons for it being approached as one company are not totally clear. It rarely mobilised with the other half of the Battalion, and in various newspaper reports it was clear that it subdivided itself into several sub-companies. The anomaly was rectified in August 1914, when it was given its own status as a seperate Battalion. UVF General Order 97 1914 stated ‘The left half of the 2nd Battalion South Down Regiment, with headquarters at Kilkeel, will in future be known as the 4th (Mourne) Battalion South Down Regiment’. Upon the formation of the 4th Battalion it numbered 484 men, with the 2nd Battalion now composed of 874 Volunteers.

Right through 1913 and 1914 the Ulster Volunteers were incredibly active across the greater Newry area. Route marches, drills, fund raising concerts and church services were all common place, while more secret military activity was also underway. Folklore details that the search for arms by local Unionists was very pro-active, with one of the main figures in the pursuit Mr Hunter Moore. The proximity of Carlingford Lough no doubt facilitated their importation, with several shipments of arms seized by customs at Greenore. As early as June 1913 four cases of Italian rifles were discovered at the port.

In September 1913 Edward Carson visited Newry, with a mass rally taking place at the grounds of T.P. Ledlie at Ashgrove. Carson was given a mounted escort from the Newry UVF, and carried out an inspection of the Battalion, around 700 present. A poem written for the occasion included the lines ‘Our leader comes to Newry, and shall we; who recognise his worth, not forgetful be; of work well done, and not shrink with craven fear; to show our colours, now our leaders here.’ 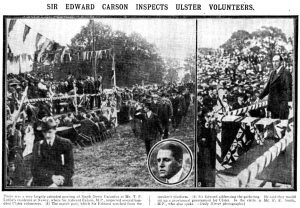 By 1914 large mobilisations were now expected, and the local corps of Volunteers had several. In late March a field day was held in Narrow Water Castle, with 500 men marching from Sugar Island to board a train to the venue. Various military manouvres were carried out, based on the premise that an invading army had landed at Greenore. A further large mobilisation took place in June, when on a Sunday afternoon a Drumhead service was held at Ashgrove.

With the outbreak of War on 28th July 1914, the heightening tensions in Ireland began to calm, with enthusiasm for the War effort overcoming large numbers of people, both Nationalist and Unionist. At the beginning of August Newry and district Army Reservists marched to the main line train station in Bessbrook to return to service, and were given an escort by both UVF and Irish Nationalist Volunteers. More incredibly in Rostrevor on 7th August during rival drills, the Ulster Volunteers and Irish National Volunteers briefly met and exchanged salutes, each in turn giving three cheers for their rivals. On 4th September 1914 a meeting of Newry Volunteers was held in their drill hall at Sugar Island, where Captain Roger Hall took names from those ‘willing to join the new force that is going to be raised to assist in defending the Empire.’ On Monday 21st the first contingent of the 2nd Battalion South Down Ulster Volunteers left for Clandeboye to begin their training.