After its formation after the ‘Battle of the Diamond’ in County Armagh in 1795, Orangeism spread rapidly over Ireland. Via the conduit of Yeomanry troops, the newly incarnated Orange movement was soon introduced to communities in which those troops were billeted, and lodges sprang up in every corner of the Island. It proved to be a movement that resonated with Irish Loyalists outside of the Yeomanry, and by the 1820’s Twelfth of July processions and celebrations were becoming common occasions.

By the early 1830’s public celebrations and commemorations for the Battle of Aughrim, the Battle of the Boyne and King Williams Birthday (4th November) were taking place in all four Irish Province’s. The Protestants of the Leinster County of Longford participated in at least two Twelfth events in 1832, with LOL 1595 meeting Toom near Ballymahon, and LOL 925 meeting at Abbey Shrule.

In the 1835 Grand Orange Lodge of Ireland register of Lodges, the County Grand Lodge of Longford under the charge of William L Galbraith of Curriegrahan, Edgeworthstown, included at least twelve active lodges. By 1856 the movement was still active, and marginally stronger with at least thirteen working Lodge warrants.

On the 16th of August 1869, the Belfast Newsletter reported that a vast Orange and Protestant demonstration had taken place at Hilton park, Clones, County Monaghan. It’s commentary included a reference that a body of 1,200 Longford Orangemen had left the County at 2am, marching with their bands and banners across Cavan, in order to be at the demonstration in time!

A County organised Orange structure fell into abeyance in the 1870’s and with it many lodges folded, but by the onset of the proposed Home Rule Bill of 1886 there was resurgence of Orangeism across Ireland in general. In 1890 the Worshipful Masters of LOL’s 830, 842, 843 and 1595, submitted an application under the seals of all four lodges to the Grand Lodge of Ireland. Within it they sought permission to form a County Grand Lodge of Longford. Their request was unanimously accepted, and at the December 1890 meeting of grand Lodge it was granted and provisional officers for the new County confirmed. Its ‘first’ Grand master was the Rev. F de Burgh Sidley, Rector of the Church at Granard and member of LOL 843. Of the nine County officers appointed, four were ministers in Longford Church of Ireland Parishes.

In the late 1800’s and early 1900’s Longford Orange lodges participated in 12th of July parades in South and West Cavan, or in Dublin Orange celebrations in the Cities ‘Rotunda’, with the Rev Sidley prominent on the platforms. Longford County Orange Lodge entered the 20th Century with five active lodges. LOL 830 was based at Ballinalee, LOL 842 at Kilglass, LOL 843 at Grandard, LOL 844 at Keenagh and LOL 1595 was Templemichael.

In the early years of the 20th century it became harder and harder to be an ‘Orangeman’ outside of Ulster without being on the end of boycott or intimidation, and there was a steady folding of lodges. The first of Longford’s five active lodges to have its warrant cancelled was Templemichael LOL 1595 in 1905.

Nevertheless a ‘Loyal’ Longford population remained. Unionist Associations, both male and female, were very active throughout the Third Home Rule Crisis, even to the extent of launching their own Ulster Covenant style document for the County. Over 1,500 people signed the Longford anti- Home Rule proclamation.

By 1914 some Longford Loyalists had even went as far as forming units of ‘Ulster Volunteers’ in the County. In 1956, Sean MacEoin (Officer commanding the North Longford IRA from 1917-1921) stated that ‘In some areas, like my own in Ballinalee, County Longford, there were units of the Ulster Volunteers in existence. In a great number of cases, the men who belonged to them were very decent Irishmen, but they felt bound to give their loyalty to the King of Great Britain and to their brothers in the North…’

The County Grand Lodge of Longford was officially dissolved on the 15th December 1915. 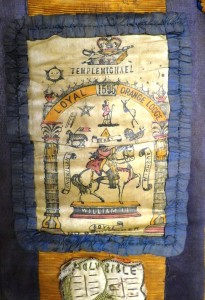