In its 3rd August 1968 edition, Connacht newspaper The Western People included an inch and a half column that many readers probably never even noticed. It reported that while digging for worms a Ballina angler had made an unusual discovery, a seal for stamping communications. What was most significant however was the seal’s inscription, namely ‘Glorious and Immortal Memory Ardnaree Orange Lodge No. 786’. The bronze stamp also included a depiction of William of Orange on horseback with ‘1690’ underneath. Angler Tommy Martin had re-discovered an item relating to the long forgotten Orange heritage of County Mayo.

The Battle of the Diamond in Loughgall 1795 that saw the birth of Orangeism, also indirectly guaranteed that the Order in Connacht would always be ensured a hostile reception, with the Battle resulting in an exodus of the local Catholic population, many of which would eventually settle in County Mayo. The extent to which Protestantism was both in a minority and separated in the County was illustrated by the fact that 1798 Rebellion in the county was unique in that there was no Protestant element in its leadership. Even so, by 1798 every County of Ireland had some level of Orangeism working within its boundaries. The most Protestant starved County of Mayo, never exceeding 3.2%, mustered two working lodges, with the activity of Yeomanry units one of the main reason for their propagation.

In the 1835 Parliamentary Select Committee Report into the nature of Orange Lodges, a listing of lodges based on official Orange records from the year previously noted there were six working Mayo lodge. LOL 807 was based in Turlough with its Worshipful Master J. McAdams, while LOL 1023 sat in the Foxford District under the leadership of the Rev George Giles. In contrast to the commonly promoted perception that many Irish Anglican Clergy in an era of famine were only interested in the spiritual well-being of Irish Catholics, Giles is on record on several occasions as campaigning and lobbying for the destitute in his locality. His politics however was clear and unambiguous, and he played a prominent role in the Protestant Conservative Society of Ireland. In 1832 a Sergeant Nixon in the Foxford constabulary was removed from his post for the crime of displaying orange lilies in the windows of his apartments in the barracks from the 1st to the 12th of July.

In the Ballina area the Rev James Huston was Master of LOL 1264; whilst the legacy of the Spanish Armadas failed attempt to invade England in the late 16th Century, and the subsequent shipwreck and survival of a small number of sailors in Connacht, was apparent in the name of the Castlebar Lodge Master. Ferdinand Langston WM of LOL 1266 was the keeper of a Public House in Castle Street in the Town. Master of Erris LOL 1267 was William Bingham, a descendant of the Dorset born Sir Richard Bingham originally sent to Ireland by Elizabeth 1 to quell rebellion, later becoming Governor of Connacht. William was son of a notorious North Mayo landlord Major Denis Bingham commonly known as the ‘King of Erris’, and he continued his father’s legacy of notoriety. Finally LOL 1502 was Mullifany (Mullafarry) in the vicinity of Killila, where Robert Eakins was Worshipful Master. 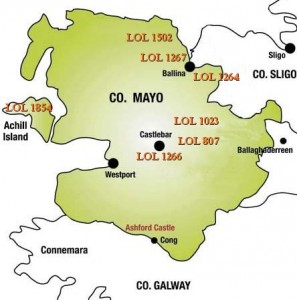 During the period, the sole references to Orange parades taking place in the County are confined to the village of Turlough. In local folklore 12th of July processions were held there in the ancient past, with the Turlough Yeomanry the instigators. Knowledge of another surprising County Mayo Lodge active in the 1850’s emerged recently at an auction in Dublin, where a unique Deputy Master’s medal for LOL 1854 Achill Island went on sale. Achill Island during the period was the seat of very forthright Protestant missionary work, and the establishment of a Lodge may well have come via the placement of Rev Charles Henry Seymour as Rector for Achill from 1847-1850. Seymour was a respected Deputy Grand Chaplain, and records note that in 1853 he vouched at Grand Lodge for new member of LOL 1854, a Roman Catholic convert on Achill Richard McKeon.

In 1851 Grand Lodge returns listed the six Mayo Lodges of 1835 as being dormant, however poor communications of the period are likely to have contributed to inaccuracies. LOL 807 Turlough was still active enough in 1854 for its WM the Rev W. Stoney to complain to Grand Lodge that recent rule revisions did not contain reference to inter faith marriage. In 1871 LOL 807 moved from Ballina to Mullafarry; while in 1873 Mayo lodges LOL 807 and LOL 786 Ardnaree which had been working direct to Grand Lodge, were in future to be joined and work with County Sligo. LOL 786 Ardnaree, the last working County Mayo Lodge under WM Charles Phair, was cancelled in 1901.