Attitudes to the Great War have changed dramatically in Irish Nationalist communities during the past decade, with the transformation in opinion particularly striking across the Republic of Ireland.  A general ambivalence to the events of the era has been gradually replaced with interest and even more- a desire to remember and commemorate both those who died and who fought.

An illustration of the level of this change was illustrated very clearly in Co Leitrim on Tuesday 11th August 2015, where a unique project came to completion. The historic building of St George’s Church of Ireland in Carrick-on-Shannon, built in 1827 and now primarily serving as a heritage and visitor centre, was the setting for the official launch of a new book entitled Leitrim- A County at War.

The evening was the culmination of a project initiated by the County Leitrim Grand Orange Lodge and supported by the International Fund for Ireland, the goal being to attempt to tell the story of the county during the Great War. Incredibly no substantial work on the subject has ever been carried out, with previous research limited to small newspaper articles. Co Leitrim also bears the unfortunate honour of being the sole county in the entirety of the island of Ireland that does not have a significant public War Memorial.

County Leitrim Grand Orange Lodge appointed a project committee, who under chairman Alan Madill in turn commissioned myself to undertake research into the topic. It was not an easy task. Leitrim proved an incredibly difficult place to gather information on the war period. The divide between the north and south of the county by Lough Allen, combined with its very rural nature and its historically overtly nationalist character, has left the Great War almost totally erased from public memory.

The research involved trawling through hundreds of pages of old newspapers, identifying and accessing other potential sources of information, and visiting groups and people across the county. During this work I also delivered several workshops on the subject, and eventually produced a 100-page book that both attempts to tell the story of Leitrim society for those four years, and also presents a freshly researched roll of honour identifying over 280 Leitrim born or resident who made the supreme sacrifice.

Many different aspects of Leitrim society in the 1910s long forgotten history resurfaced during the research, triggering great interest among locals. The pre-war Irish Volunteers were perhaps stronger in Leitrim than any other county; however the Ulster Volunteer Force too had a presence.

Support for the war was almost universal across Leitrim from the outset and even after the Easter Rebellion in 1916 still remained strong; with the events in Dublin chastised both publically by politicians and in the pulpits of chapels.  The central role of landed families like the Crofton’s of Mohill is also explored; while other areas touched on include recruiting meetings, the reception of German nationals, and the effects of army separation allowance on public drunkenness!

Dr David Hume, director of services for the Grand Lodge of Ireland acknowledged the value of the work stating: ‘‘The impact of the Great War on Irish society has largely been forgotten until recent years. Thankfully that is rapidly changing. This publication is a detailed and impressive one, focusing on how the war years affected Leitrim and its people. Quincey Dougan brings the story of individuals and their families to the forefront of his history, which is as it should be.’’

Alan Madill, project committee chair, has emphasised that the project has been very positive and surpassed all expectations.

‘‘By bringing together people who have not previously taken part in cross community activities, the initiative has made significant progress in creating greater understanding and building new relationships across both communities – helping to change mind-sets and create a shared future. We believe the project will have a long-lasting and very beneficial impact by fostering relationships between people who may otherwise not have met outside this project.”

County Leitrim Orange Grand Master Joseph Morton echoed Alan’s comments, stating: ‘‘We should all be grateful for the efforts of Quincey Dougan in bringing this history to life and hopefully it will provoke a wide interest in County Leitrim in this subject.’

Anyone wishing to obtain a copy of Leitrim- A County at War can contact Alan Madill on 07909 895915 or by email to alanmadill@hotmail.co.uk. It is hoped that copies will also soon be available in Northern Ireland from the new Orange Museums at Schomberg House Belfast and Sloan’s House Loughgall. Quincey Dougan has also now begun research into the history of the Orange Order in County Leitrim, and would welcome the input of anyone with related information or artefacts. You can contact Quincey on 07835624221 or by emailing kvfb@yahoo.com. 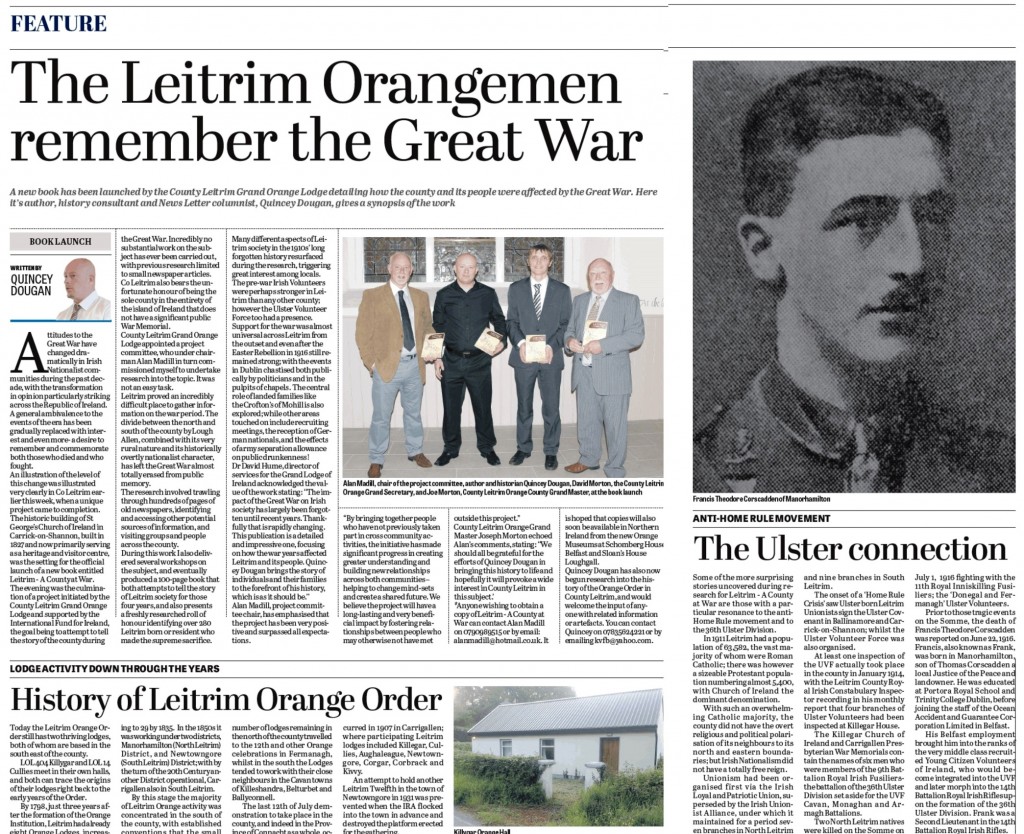