One of the first county’s to establish a County Grand Lodge, even as late as 1884 there were still a reported 400 active Orangemen in Sligo. At the turn of the 20th century 10 lodges were still operating under the County organisation including one in north-west Leitrim (Dromahaire) and one in Roscommon (Boyle).

The Cooper family were prominent in the Sligo Orange Order, indeed had a ‘Loyal’ history dating from the arrival of their ancestor Edward Cooper with Cromwell. Throughout the 19th Century Arthur Brooke Cooper and his ancestors were forthright in vocalising their views. There were at least four dedicated Orange Halls in Sligo (noted in Grand Lodge reports), with in 1888 a hall erected at Riverstown for Riverstown LOL 1733 and named the Cooper Memorial Hall. 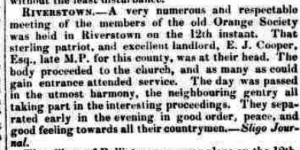 The last Twelfth of July procession would appear to have taken place in Riverstown in 1845, however despite not parading locally the lodge continued to thrive in later years. In 1890 while LOL 1733 was under Worshipful Master J. Barlow, several local and national newspapers reported that an outrage of a break in at an Orange Hall had taken place in Riverstown. The Cooper Memorial Hall had been entered and the ‘Orange Box’ broken into stealing sashes, account books and money. The Lodge warrant, LOL 1733, was thankfully found outside the hall although the glass and frame it had been in were broken; carpets and fittings had been stolen; and a Bible had had pages ripped from it. On the 16th July 1890 the Rector of Taunagh Church of Ireland Riverstown wrote to the Belfast Telegraph detailing the incident and requesting donations to help repair damages.

The hall was only recently renovated, and today it is still used as and refered to as historically being a church hall. The evidence however would indicate it was originally built as an Orange Hall. Three lodges survived in Sligo until the 1920’s, at which time it became impossible to be an Orangeman in the County for fear of attack and boycott.